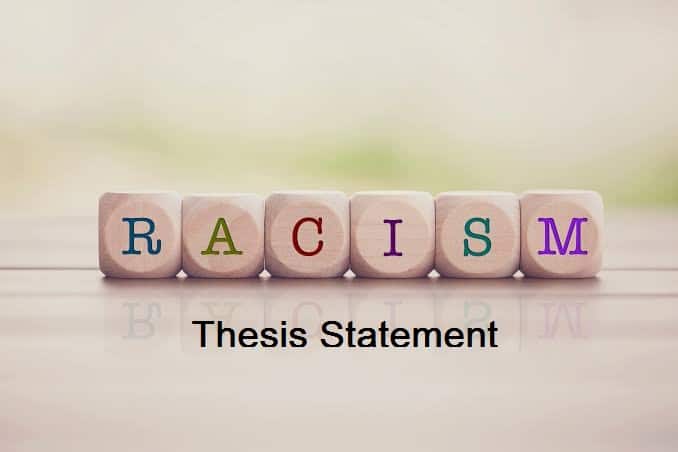 How to Write Racism Thesis Statement with Examples

As a student, you will handle a wide range of subjects and assignments.

One topic that is popular for essays and research papers is racism.

There are a lot of resources on the topic, so students tend to assume a racism essay is easy.

The challenge you will face with a racism essay is not content, but coming up with a thesis statement.

A racism thesis statement should be powerful and something your audience can understand and relate to.

Tips On How To Write A Racism Thesis Statement

Before writing your racism thesis statement, consider the following guidelines.

Racism is a broad issue that continues to plague the world even today.

For that reason, it shouldn’t be difficult to find an informative topic from which you can develop a thesis statement.

You can choose to approach racism through other social issues such as art, politics, economy, equitability, poverty, and history.

2. Pick a topic that is interesting to you

You might not be familiar with all the issues surrounding racism.

And, as mentioned earlier, racism is a broad topic; there are many approaches you can take in your paper.

Therefore, to have an easier time developing a thesis, pick a racism topic that interests you.

For instance, if you are conversant with the history of America, your thesis statement could focus on the effects of racism during the Civil Rights Movement that began in 1954 and ended in 1968.

As you write your thesis statement, try to include a hook.

A hook is a statement that grabs the attention of a reader.

Try hooking your reader by relating your thesis to popular culture.

You could even refer to current issues on the news or even relate to popular television programs, movies, or books.

Remember racism is a personal issue; it is open to bias depending on your line of thinking.

Therefore, most of the issues surrounding this topic are controversial.

When discussing a controversial topic in an academic paper, avoid offensive and rude language.

To get a good score in your racism-related research paper or essay, you need a well-thought-out and well-constructed thesis statement.

The following are examples of thesis statements in different racism topics.

Such an essay tries to prove that racial segregation is still a significant social problem.

Therefore, your thesis statement should focus on the problems racial segregation causes.

It is a fact that police killings involving people of color are more compared to white people. Joshua Correll of the University of Colorado, confirmed this when he designed a game where the participants played cops. The results of the game indicated that, despite the race of the people playing cop, they were more willing to kill a person of color and showed hesitation when the suspect was a white person. This shows that racism continues to plague society.

Racism is a form of prejudice often experienced in a workplace environment.

A workplace racism thesis statement could read as follows:

Anti-racism is a phrase that was coined by people who formed movements to fight the consequences of racism.

The greatest anti-racist movement was the one led by Martin Luther King Jr between the early 50s and the late 60s.

An anti-racism essay thesis statement should evoke emotion from a reader.

The following is an example:

Anti-racism movement leaders were treated inhumanely; Nelson Mandela was imprisoned for 27 years and Martin Luther King Junior was assassinated. But, without them, society today would not be as egalitarian as it is. Their sacrifices are the sole reason blacks and whites can walk on the same street and even work together to create a brighter future.

You can choose to write about the cause and effect of racism.

For example, ignorance is a cause of racism that results in fear and eventually violence.

The following is an example of a thesis statement that focuses on ignorance and fear as the primary causes of racism.

Undoubtedly racism has negative consequences, key among them being fear and violence, as a result of a need to protect themselves. One major cause of racism is ignorance. Uneducated and unexposed feel threatened by people of a different race. Such people condone and practice this prejudice without considering it has negative effects and consequences on both the individuals they are discriminating and the society at large.

Racism Thesis statements based on art and literature

The following are examples of literary and artworks you can base a racism essay on:

Othello is a play by Shakespeare that addresses some delicate societal issues such as racism.

You could develop a thesis statement highlighting the racism in the play.

Othello, who was black, was highly disrespected by Lago, and other characters such as Emilia, Roderigo, and Brabantio. These characters labeled him ‘Barbary horse’, ‘an old black ram’, ‘thick lips’ and other demeaning names. He was also abused for marrying a Venetian woman. All this shows that there is a strong conviction that one race is superior to the other and a barbaric intolerance towards the ‘inferior’ race.

2. To kill a mocking bird

This book by Harper Lee is popular for the way it portrayed the struggles of a black man in the southern states in the early 20th century.

The book is a good source for a racism essay as it depicts racism and effects in an easily comprehensible way.

The following is an example of a racism thesis statement from To Kill a Mocking Bird:

Tom Robinson was suspected of murdering Mayella Ewell, a white woman, and was sentenced not because there was any evidence but because he was black. White characters, like Atticus Finch, Scout, and Jem, who tried to defend him were given shaming names such as ‘Nigger lovers’. The story in the book clearly shows the tribulations a black man went through and how his word meant nothing.

Disney films are popular for their interesting and fascinating stories, as well as world-class acting and production.

However, close scrutiny of several films and you will realize there is a certain degree of racial prejudice in the way the films portray characters.

The following is an example of a thesis statement focusing on the racial prejudice in Disney films:

There is a significant degree of racial prejudice in the way Disney portray characters in their films. For example, in Jungle Book, the gorillas communicated in an African vernacular language. Another example is in Lady and the Tramp where the cat villains had slanted eyes and spoke with an East Asian accent. The film production company has a tendency to portray protagonists as white and antagonists as people of color.

To demonstrate, consider this thesis statement:

Racism is a fairly easy subject for an essay and research paper.

However, it has so many sources and so many different points of view that selecting one idea to focus on creating a thesis statement can be problematic.

But, with the guidelines shared above developing a thesis statement for your racism essay will not be as difficult.

Remember, you need to let the reader know your point of view and you should demonstrate your objectiveness on the issue.

Example of thesis statements on racism

Just follow the formula:
Our outline + your text =
perfect essay

Arguments & references included! Get in 12 h

Any cookies that may not be particularly necessary for the website to function and is used specifically to collect user personal data via analytics, ads, other embedded contents are termed as non-necessary cookies. It is mandatory to procure user consent prior to running these cookies on your website.